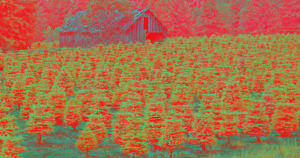 Researchers at North Carolina State University are exploring the use of drones to monitor the growth of Christmas trees in the Blue Ridge Mountains.

“Instead of going out and measuring individual trees, a person could fly a drone,” research associate Justyna Jeziorska said in a statement.

That could prove especially handy since the most popular Christmas tree species in the area, the Fraser fir, grows best in mountainous areas and on steep slopes.

Drones have been used to 3D-scan natural landscapes in the past, but current landscape analysis software tends to make individual trees appear like short domes rather than anything that actually looks like a tree.

That makes the process of analyzing the trees’ height and diameter near impossible, which is why the NC State team is developing new 3D-processing techniques.

In addition to monitoring the Christmas trees’ size, drones could also tell farmers if the trees are diseased by detecting discoloration or even spray herbicides and pesticides on them from above, according to the researchers.

The team is hoping their drone techniques could be used by other types of tree farmers in the future as well.

“If this research shows that drones are useful for managing Christmas trees, the info we provide will allow someone with their own interest and their own drone to do it themselves,” project collaborator Zac Arcaro said in the statement.

The post Farmers Could Use Drones to Grow Better Christmas Trees appeared first on Futurism.

Go here to see the original:
Farmers Could Use Drones to Grow Better Christmas Trees