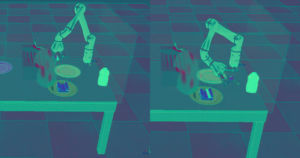 At long last, robots have conquered one of the last bastions of human dominance: the grill.

After training an artificial intelligence in a virtual reconstruction of a grill, Boston University engineers built a robot that can successfully cook and serve perfectly acceptable hot dogs to its human masters, Inverse reports.

While it sounds like a minor triumph, the process of cooking and preparing food involves background knowledge that humans take for granted but that has, until now, consistently tripped up AI systems.

The engineers found that the robot was able to reach the rank of grill master when they trained it using a process called reinforcement learning, according to research published Wednesday in the journal Science Robotics. Compared to the other kinds of AI they tried, reinforcement learning was by far the best method for the chef-in-training.

Reinforcement learning is an AI architecture that basically incentivizes a system to gradually learn a new skill by coding it to perceive success as intrinsically rewarding.

When it came to cooking a hot dog, “success” included learning things like the correct order of actions — cook the meat and then place it in a bun — as well as things people see as common knowledge, such as the fact that gravity remains a constant threat.

“You have to define things beforehand,” BU engineer Zahcary Serlin told Inverse. “As long as I know what you mean by ‘grill’ when you say ‘grill,’ then I can learn to do the thing that has ‘grill’ in it.”

The post Finally, a Smart Robot That Can Cook and Serve Us Hot Dogs appeared first on Futurism.

View original post here:
Finally, a Smart Robot That Can Cook and Serve Us Hot Dogs