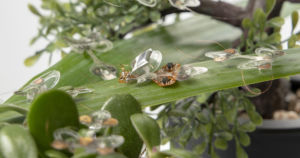 As if nature wasn’t already full of pests, a team of engineers just built their own — and the little bug can take a beating.

The DEAnsect is a soft robot modeled after an insect, and it’s the work of engineers from Switzerland’s École polytechnique fédérale de Lausanne (EPFL) and France’s University of Cergy-Pontoise.

After they built the bot, the engineers stomped on it, smooshed it with a fly swatter, and even folded it in half, but the robot kept scooting along — a creepy mental image, sure, but also a big step forward for soft robotics technology.

According to research published Wednesday in Soft Robotics, the engineers built two versions of the DEAnsect — one tethered to a controller and the other wireless and more autonomous — giving scientists the ability to choose the little critter that best meets their needs.

The two versions present a tradeoff between durability and mobility. The tethered model can survive more abuse because it only contains its own tiny artificial muscles. The wireless model, however, has to carry visual sensors, a battery, and other electronics that make it a bit more vulnerable to being squished.

Even if the wireless bug can’t take as much abuse, the fact that it can carry everything it needs marks a significant leap forward for autonomous soft robots.

“This technique opens up new possibilities for the broad use of [artificial muscles] in robotics,” researcher Herbert Shea said in the release, “for swarms of intelligent robotic insects, for inspection or remote repairs, or even for gaining a deeper understanding of insect colonies by sending a robot to live amongst them.”

READ MORE: A soft robotic insect that survives being flattened by a fly swatter [EPFL newsroom]

The post This Robotic Bug Was Designed to Survive Swatting appeared first on Futurism.

See the original post here:
This Robotic Bug Was Designed to Survive Swatting