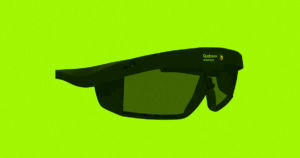 Niantic, the company that created augmented reality games including the undying Pokémon Go and the much more forgettable Harry Potter: Wizards Unite, is now developing a new pair of AR glasses.

The company announced on Thursday that it’s partnering up with the tech company Qualcomm to create the glasses, according to CNET. As Apple and Facebook also work toward their own smart glasses in bids to succeed where Google Glass spectacularly failed, Niantic is entering the fray and creating a new design that will use Qualcomm’s new mixed reality chip, all in an attempt to finally make AR wearables happen.

Niantic and Qualcomm haven’t explained how the glasses might be used — and, arguably more importantly, it remains unclear whether they’ll be compatible with Pokémon Go.

Rather, CNET reports that the companies seem to be developing glasses that other companies could license and sell rather than actually manufacturing them.

More on Pokémon: Putting Pokémon On The Blockchain Takes Microtransactions To Their Inevitable, Insufferable End

The post The Company Behind Pokémon Go Is Making AR Glasses appeared first on Futurism.

See the rest here:
The Company Behind Pokémon Go Is Making AR Glasses