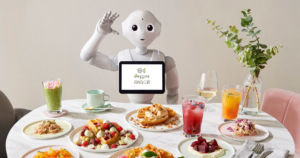 On Thursday, SoftBank Robotics opened the Pepper PARLOR, a cafe where three different types of robots work alongside human staff to serve and entertain customers.

“[The] aim is to create a space where people can easily experience the coexistence of people and robots and enjoy the evolution of robots and the future of living with robots,” the company told ZDNet. “We want to make robots not only for convenience and efficiency, but also to expand the possibilities of people and bring happiness.”

SoftBank developed all three of the robots working in the Pepper PARLOR, including the cafe’s eponym, Pepper. That semi-humanoid robot does most of the interacting with customers, greeting them and taking their orders.

SoftBank didn’t open the Pepper PARLOR just so it could show the public what a future full of robots might be like, though. It also hopes to use the cafe to gather data about how to make its robots more useful for clients.

“We will be able to build know-how by managing the store on our own instead of relying on a partner business,” SoftBank’s Chief Creative Officer Kazutaka Hasumi told The Asian Review. “That way we will be able to propose functions that companies want in robots.”

More on Pepper: A Robot Is Scheduled to Testify in Front of the UK Parliament

The post Cafe Staffed by Robots Opens in Japan appeared first on Futurism.

Excerpt from:
Cafe Staffed by Robots Opens in Japan