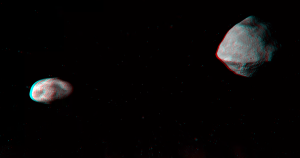 Excerpt from:
Asteroid Flying by Earth Is so Big It Has Its Own Moon