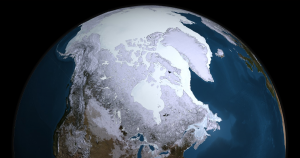 U.S. Secretary of State Mike Pompeo has found what he believes is the silver lining to melting Arctic sea ice: economic opportunity.

“Steady reductions in sea ice are opening new naval passageways and new opportunities for trade, potentially slashing the time it takes for ships to travel between Asia and the West by 20 days,” he said on Monday, according to the Associated Press. “Arctic sea lanes could become the 21st century’s Suez and Panama canals.”

Pompeo’s remarks came during a meeting of the foreign ministers of the Arctic Council, a group comprising the United States, Canada, Russia, Finland, Norway, Denmark, Sweden, and Iceland.

Every two years, the group convenes to discuss any economic or environmental challenges facing the Arctic region, releasing a joint declaration at the end of every meeting.

Every meeting except this one, that is.

According to the AP report, Finland’s Foreign Minister Timo Soini said the group didn’t release a declaration because someone he didn’t want to “name and blame” refused to include language about climate change in it.

Still, at least the meeting wasn’t a total wash.

Thanks to Pompeo, we can now see the bright side of melting Arctic sea ice  — it was just hiding behind all the starving wildlife, rising sea levels, extreme weather events, and leaking greenhouse gases.

More on sea level rise: Polar Bears Are Terrorizing a Russian Town Due to Climate Change