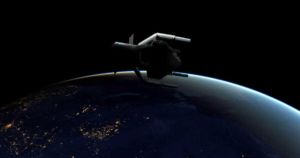 Earth’s orbit has become a graveyard of past space missions. Thousands of defunct satellites and bits of old rockets are careening through the skies at speeds averaging 20,000 kilometers per hour (12,500 miles per hour) — junk that’s a constant threat to new missions.

Now, to address the issue, the European Space Agency has officially approved the approximately $133 million needed to fund ClearSpace-1 — the world’s first mission dedicated to cleaning up space debris.

The ESA’s plan is for a team led by Swiss startup Clearspace to launch a robotic probe into space in 2025. The probe will use its four arms to grab Vespa, a single 100-kilogram (220-pound) piece of space junk left behind by the ESA’s Vega launcher.

Once it grabs hold of Vespa, the probe will drag it toward Earth, causing both the probe and the debris to burn up in the atmosphere.

Getting rid of one piece of space junk won’t do much to address the core threat. And a $133 million system that essentially self-destructs each time it collects of piece of debris wouldn’t be cost effective.

Still, the ESA hopes the mission will demonstrate the technologies needed to start cleaning up space — and lead to the future creation of a garbage collector that can send debris hurtling toward Earth’s atmosphere without sacrificing itself in the process.

The post The ESA Is Sending a Robotic Junk Collector Into Space appeared first on Futurism.

Go here to read the rest:
The ESA Is Sending a Robotic Junk Collector Into Space