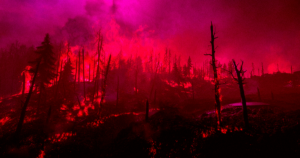 Every year, the Bulletin of the American Meteorological Society releases a report about all the studies published within its pages that attempted to determine the cause of extreme weather events that year.

Ever since the first annual report was published in 2011, an increasing trend has emerged: more and more fires, disastrous storms, and other events have been identified as symptoms of worsening climate change around the world, according to E&E News. It’s a troubling pattern that drives home unfortunate realities: climate change means more than rising temperatures, and we can expect more meteorological devastation in the future.

The latest report analyzed studies that were published over the course of 2018. Of those, an overwhelming majority causally linked the weather in question to climate change.

Only one paper didn’t, according to E&E News, but that may have been due to a limited data set — not because climate change wasn’t to blame.

Some of the studies found that the extreme weather events that they were analyzing were only possible in a world with a changing climate. For instance, a 2017 heat wave near Australia couldn’t have possibly happened unless climate change was real and driving the wave itself.

And as our worsening climate creates entirely new weather problems, we may be stuck an ever-rising amount of new storms.

More on the environment: Scientists Are 99.9999 Percent Sure Humans Caused Climate Change

The post Study: Many Extreme Weather Events Were Caused by Climate Change appeared first on Futurism.