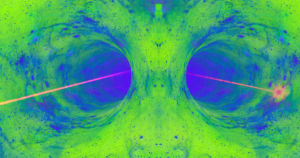 The prestigious academic physics journal Physical Review Letters published a paper this week about cutting-edge laser tech — and, if bloggers are to be believed, it could have juicy ramifications.

The paper itself is dry and technical, but the prominent tech blog Ars Technica‘s interpretation of its findings is anything but. According to Ars, in fact, the tech it describes could pulse a laser “through fabric of the Universe.”

A key problem with super-powerful lasers, according to Ars’ explanation, is that they tend to shred anything you use to focus the beam.

The idea behind the paper, by a researcher at the Université Paris-Saclay, is that you could use a mirror made out of plasma — you know, the ultra-hot stuff the Sun is made out of — to focus the beam.

And if they can pull that off, according to Ars — we should point out again that this all sounds very hypothetical — the laser could tear into “the very fabric of space and time.”

“Will it work in reality? I think so,” wrote Ars writer Chris Lee. “Then, of course, they can all stare in wonder at the hole they made.”

More on reality: Physicists Are Starting to Suspect Physical Reality Is an Illusion

The post New Lasers May Be Powerful Enough to Drill a Hole in Reality appeared first on Futurism.

Read the original:
New Lasers May Be Powerful Enough to Drill a Hole in Reality