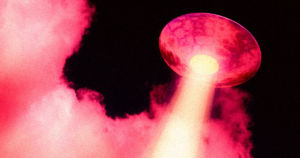 Three U.S. military videos that show footage of “unidentified aerial phenomenon” are authentic, according to U.S. Navy statements obtained by The Black Vault, a blog dedicated to exposing government secrets.

“The Navy designates the objects contained in these videos as unidentified aerial phenomena,” Joseph Gradisher, official spokesperson for the Deputy Chief of Naval Operations for Information Warfare, told The Black Vault.

The videos first revealed to the public back in 2017 by The New York Times and To The Stars Academy of Arts & Science, a UFO organization co-founded by former Blink-182 frontman Tom DeLonge.

To be clear, the new statement doesn’t mean the Navy is claiming aliens are real: “unidentified aerial phenomena” are simply just that — unidentified and unexplained; no little green men necessary.

One of the videos, dating back to 2004, shows a so-far unexplained object that “appeared suddenly at 80,000 feet, and then hurtled toward the sea, eventually stopping at 20,000 feet and hovering,” as The New York Times wrote in its 2017 report.

Another shows footage taken by a fighter jet in 2015 of an object that passes below at extremely high speeds. “What the […] is that thing?” one of the pilots asks in the video.

The videos were also never meant to be seen by the public.

“The videos were never officially released to the general public by the DoD and should still be withheld,” Pentagon Spokesperson Susan Gough told The Black Vault earlier this year.