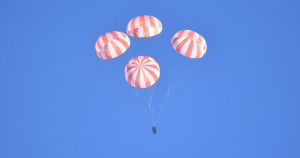 NASA administrator Bill Gerstenmaier admitted during a contentious hearing before the House of Representatives Wednesday that SpaceX’s Crew Dragon shuttle smashed into the ground last month after a failed parachute test — alarming news that comes in the wake of a separate SpaceX failure last month when a Crew Dragon apparently exploded during a different test.

“The test was not satisfactory,” Gerstenmaier said. “We did not get the results we wanted. The parachutes did not work as designed.”

During a parachute test over a dried-out lake bed in Nevada, an empty Crew Dragon shuttle was damaged when it crashed into the ground, Gerstenmaier said.

The Crew Dragon is equipped with four parachutes, and this particular test was designed to determine how safely the spacecraft could land with one parachute intentionally disabled. But the other three chutes didn’t work right, leading to the incident Gerstenmaier described.

All the same, Gerstenmaier expressed confidence that the parachute problem will be solved in time for NASA and the federal government’s ambitious space travel plans.

“NASA is fully engaged on this,” he said.

READ MORE: SpaceX had a problem during a parachute test in April [Ars Technica]

More on NASA: NASA Head: “This Time, When We Go to the Moon, We Will Stay”