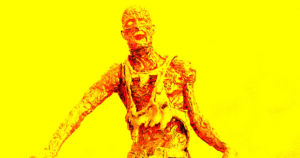 Go here to see the original:
Horrifying Study: Corpses Thrash Around For a Year After Death