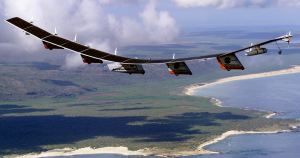 Japanese tech giant SoftBank partnered with NASA and U.S. aerospace company AeroVironment to build a massive solar-powered drone that can beam 5G connectivity down to practically anywhere in the world.

A maiden voyage of SoftBank’s Hawk 30 prototype could take place as soon as next week, according to a November Space Act Agreement with NASA. More test flights will follow within the next three months — an initiative that if successful could bring wireless connectivity to the most remote regions of the globe.

The Hawk 30 is an unmanned aerial vehicle (UAV) that features ten electric engines and can fly at altitudes of over 65,600 feet (20 km) according to IEEE Spectrum. Other than that, details are sparse.

The Hawk 30 won’t be the first UAV of its kind to attempt to bring connectivity to remote areas. The drone that holds the record of any winged horizontal aircraft was set by AeroVironment’s previous prototype, the Helios. That prototype was “an elegant flying wing wider than a 747 but weighing less than just one of the jumbo jet’s 18 landing wheels,” IEEE Spectrum writes.

It flew at an altitude of 93,000 feet back in 2001, but splintered into tiny pieces and fell into the Pacific Ocean just two years later due to turbulence.

Facebook also jumped on the bandwagon with its Aquila solar-powered drone. The Aquila project was an experiment to see if it was possible to bring internet connectivity to remote areas as well. A prototype stayed aloft for almost two hours over the Arizona desert in June 2017 during its second test flight. But the project was grounded in June 2018.

Even Google tried its hand, testing its SkyBender system in 2016. High-altitude balloons made more sense to the company in the end — the project was replaced by Alphabet’s Loon project in 2017.

It’s a concept with a poor track record so far. But that’s not stopping companies from learning from their mistakes and trying again.

The post NASA Is About to Test a Giant Solar Drone That Broadcasts 5G appeared first on Futurism.