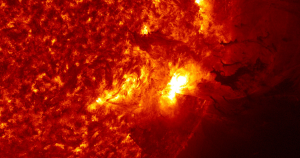 Scientists from Dublin, Ireland and Paris, France just reported some amazing observations from a massive ultraviolet radio telescope in central France: they managed to image radio pulses and watch plasmas become unstable in the Sun’s atmosphere.

Plasma is extremely difficult to study and observe. But by studying the plasma in the Sun’s atmosphere — its gases exist primarily in plasma form since, obviously, it’s extremely hot — the researchers say we could learn how to control the plasma here on Earth and finally make fusion energy a reality.

For fusion energy to occur, you need tightly contained and extremely hot and pressurized plasma inside a reactor. But controlling that plasma is extremely difficult.

“The only problem is that nuclear fusion plasmas are highly unstable,” said Dublin Institute of Advanced Studies professor Peter Gallagher in a statement about the new work. “As soon as the plasma starts generating energy, some natural process switches off the reaction.”

But that’s where studying an abundant source of the stuff in our Solar System comes in handy.

“By studying how plasmas become unstable on the Sun, we can learn about how to control them on Earth,” Gallagher added.

More on energy: Scientists Have a New Idea to Make a Fusion Reactor Practical

The post Studying the Sun’s Atmosphere Could Make Fusion Power a Reality appeared first on Futurism.

Studying the Sun’s Atmosphere Could Make Fusion Power a Reality