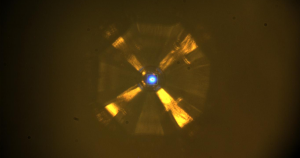 An international team of scientists has built a superconductor that functions at 250 Kelvin, or -23 degrees Celsius — or just-9 degrees Fahrenheit.

That’s a few degrees colder than the chilliest winter day in Florida history, but it’s nearly 50 Celsius degrees (84.6 Fahrenheit degrees) hotter than the previous record high for superconductivity — and it puts the “holy grail” of energy transmission almost within our reach.

First discovered in 1911, superconductors are devices that can conduct electricity with zero resistance.

Because none of the energy is lost during the transmission process, superconductors could allow us to generate electricity in one place — a solar farm in a sunny region of the U.S., for example — and send it all over the place without wasting any.

The problem is that scientists have yet to create a practical superconductor — the devices all require extreme conditions, such as freezing cold temperatures and incredibly high pressures, which limits their usefulness.

That’s why scientists across the globe are on the hunt for a superconductor that works at room temperature — and this new study, published on Wednesday in the journal Nature, represents a giant leap forward in that effort.

In it, the scientists describe how they created a type of material called a lanthanum superhydride. By placing enormous pressure on a bit of the material, they were able to coax it to act as a superconductor at the record-high temperature.

“Our next goal is to reduce the pressure needed to synthesize samples, to bring the critical temperature closer to ambient, and perhaps even create samples that could be synthesized at high pressures, but still superconduct at normal pressures,” researcher Vitali Prakapenka from the University of Chicago said in a news release.