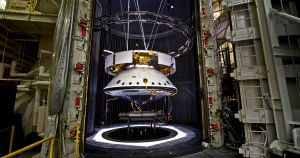 The unmanned spacecraft that NASA wants to send to Mars in the year 2020 — if things go according to plan — just underwent a series of extreme tests to prepare it for the extreme journey.

“First we blast it with sound to make sure nothing vibrates loose,” said David Gruel, launch operations manager at JPL, in a press release. “Then, after a thorough examination, we ‘put it in space’ by placing the spacecraft in this huge vacuum chamber we have here at JPL.”

Things got intense inside that vacuum chamber. After the facility’s 16-ton door closes, temperatures drop to -200 Fahrenheit (-129 Celsius). Then, powerful xenon lamps are turned on to simulate the sun’s harsh rays in outer space.

“This is the most comprehensive stress test you can put a spacecraft through here on Earth,” said Gruel. “We flew in our simulated space environment for a week and a day, checking and rechecking the performance of every onboard system and subsystem. And everything looked great — which is a good thing, because next time this spacecraft stack hits a vacuum, it will be on its way to Mars for real.”

More on Mars 2020: You Can Now Send a Souvenir With Your Name on it to Mars

The post Here’s How NASA Prepares Its Spacecraft for Mars appeared first on Futurism.

Here’s How NASA Prepares Its Spacecraft for Mars