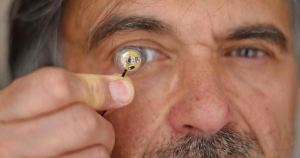 And, notably, it caught the attention of the U.S. military’s attention: the Defense Advanced Research Projects Agency (DARPA) is reportedly interested in the contact lens to augment troops’ visual capabilities in the field, according to Task and Purpose — meaning the gadget could represent the augmented contact lens that DARPA has spent a decade searching for.

The biggest challenge that IMT Atlantique engineers encountered was to scale down the battery. But thanks to a newly developed flexible micro battery, they found a way to continuously light an LED light source for “several hours,” according to a press release.

The release also suggests that “graphene-based flexible electronics” could further enhance the smart contact lens’ capabilities. Applications could range from assisting surgeons in the operating room to helping out drivers on the road.

And now the military wants in on the project as well. French business magazine l’Usine Nouvelle writes that DARPA is interested in the technology. Even tech giant Microsoft is ready to invest two million euros, according to the magazine — which is notable, considering the tech company’s recent HoloLens contract with the U.S. Army.

“All the elements are ready,” Jean-Louis Bougrenet de la Tocnaye, project lead at IMT Atlantique, told l’Usine Nouvelle, as translated from the original French. “We should integrate it in October 2019 and hope to start testing in 2020. Then we will be able to go to the qualifying clinical tests.”

DARPA: This Smart Contact Lens Could Give Soldiers Superpowers