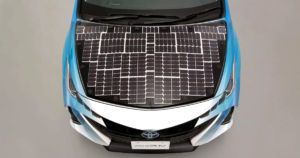 Toyota Wants to Slather Solar Panels All Over Its Prius Hybrid