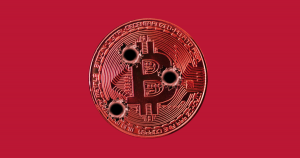 A key promise of the digital cash known as cryptocurrency is its security — because only you possess the password to access your money, it’s presumably more safe than it would be at a bank.

But a grisly crime in the Netherlands — in which home invaders tortured a crypto trader in an attempt to force him to give up his coins — shows that there’s also a dark side to having total control over your own wealth.

According to the Dutch newspaper De Telegraaf, a trio of robbers disguised as police burst into the home of an unidentified cryptocurrency trader in late February.

Then, in view of the man’s four-year-old daughter, they tortured the crypto trader with an electric drill — causing injuries so severe that he was hospitalized for five days, according to a follow-up story.

It’s not clear whether they obtained any of the crypto trader’s funds before leaving, but if he did turn over his password, the criminals could have transferred the money to an anonymous account almost instantly.

Dutch police were horrified by the crime, according to De Telegraaf, and dispatched 15 officers to investigate. The cops refused to comment, but police sources confirmed to the newspaper that the criminals were after the man’s cryptocurrency holdings.

Crypto news site CoinTelegraph pointed out that there have been other examples of violent criminals attempting to steal cryptocurrency, such as a Russian businessman who was held hostage until he surrendered his Bitcoin funds.

“If you are rich and you own real estate, or stocks or a sports team, somebody can’t mug you and take your sports team away,” Bitcoin engineer Jameson Lopp told The New York Times in 2018. “Having liquid crypto assets makes you much more attractive for that type of criminal attack.”

More on cryptocurrency: Did a Crypto CEO Fake His Own Death to Abscond With $190 Million?

The post Robbers Tortured a Man With a Drill to Steal His Cryptocurrency appeared first on Futurism.

Robbers Tortured a Man With a Drill to Steal His Cryptocurrency