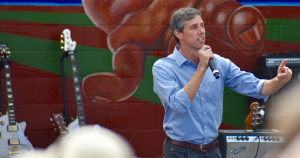 Presidential candidate Beto O’Rourke just admitted to spending his teenage years as part of the Cult of the Dead Cow (CDC), a group of hackers that first coined the term “hacktivism.”

O’Rourke, who failed to unseat Senator Ted Cruz in the 2018 midterm election and recently decided to run for president instead of challenging Senator John Cornyn in 2020, told Reuters that he credits the hacker group for helping develop his worldview — an intriguing admission for an unusual candidate who skateboards and used to play in a punk band.

According to Reuters, there’s no evidence that O’Rourke actually engaged in any sort of serious hacking, though he did cop to stealing the long-distance phone service necessary for reaching the online message boards of the day.

Rather, O’Rourke seemed to spend his time in the Cult of the Dead Cow writing and sharing fiction with the community, such as a short story he wrote at age 15 about running over children in a car, Reuters reports.

“We weren’t deliberately looking for hacking chops,” CDC founder Kevin Wheeler told Reuters, describing the group’s attitude during the period of time O’Rourke was most active. “It was very much about personality and writing, really. For a long time, the ‘test,’ or evaluation, was to write [text files]. Everyone was expected to write things. If we were stoked to have more hacker-oriented people, it was because we’d be excited to have a broader range in our t-files.”

“There’s just this profound value in being able to be apart from the system and look at it critically and have fun while you’re doing it,” O’Rourke said. “I think of the Cult of the Dead Cow as a great example of that.”

The presidential hopeful, who espouses a mix of traditional liberal and libertarian views, describes the group as a sort of network for outcasts from society.

“When Dad bought an Apple IIe and a 300-baud modem and I started to get on boards, it was the Facebook of its day,” he said. “You just wanted to be part of a community.”

More on hacktivism: It’s Now Scary to Be A White Hat Hacker Thanks to the US Government