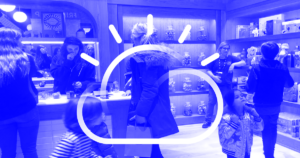 Your Clouds Can (YCC) 2019 was an immersive experience unlike any conference. Its purpose? To understand how seemingly traditional businesses can utilize data and cloud based technology to reimagine themselves and grow.

On June 5th, Futurism and IBM took attendees on a journey – but, unlike traditional conferences, they brought the audience members directly to the speakers’ headquarters. They immersed the attendees into the culture, attitudes, and atmospheres of these innovative companies to give them a deeper understanding of these tools, and how they can be applied to attendees’ businesses.

Attendees and hosts alike enjoyed conversations, not presentations, and dialogues, not monologues. On-site and hands-on, attendees went behind the curtain at each stop on this innovation tour to fully investigate and discover exactly how each of these companies are leveraging data and technology for growth.

YCC attendees were guided through experiences and discussions at four NYC companies actively innovating and changing the landscape of their industries. The first stop and breakfast was at CAMP, a brand new retail venture at the cross section of toy stores and playgrounds. CAMP uses technology and data to improve the speed and accuracy of merchandising decisions, allowing them to transform their retail environment three to four times a year based on the interests of their customers and cultural trends.

Next, guests toured BuzzFeed and learned how they leverage data-driven insights generated from their millions of readers to develop brand new products and campaigns for clients. Jake Bronstein, VP of Innovation at BuzzFeed, spoke about their unique sprint process with their editorial and data teams: “We have a big preference for test and learn, there’s no one model,” Bronstein said. “What does our audience need? How do we make that happen?”

Afterwards guests visited LivePerson, and learned how their AI-powered conversational platform is transforming customer engagement into a source of competitive advantage. As pioneers in live chat, LivePerson gave an inside look at how companies like GEICO and The Cosmopolitan are communicating with their customers using AI to create meaningful differentiated experiences.

Finally, the day concluded at Betaworks, a tenacious tech company running accelerators and designing communities at their new membership club in NYC’s Meatpacking District.  Here a panel of start-up veterans and leaders discussed how to scale innovative ideas faster through cloud and other technologies. To close the day, Krissi Xenakis, Design Lead for the IBM Garage, explained how IBM teaches companies to iterate, experiment, build, and develop, using a design thinking approach that fosters the type of innovation seen at CAMP, BuzzFeed and LivePerson.  “What’s the smallest thing we can build that tests the greatest risk of our innovation? We need to test that the assumptions about our user are accurate and meaningful.” she said.

Through out the day, attendees were able to have breakout sessions in transit between locations to collectively digest and discuss what they had learned.. Make no mistake, this was not awkward attempts at networking. This was natural conversation, fun and insightful, made casual through the immersive, traveling nature of the conference itself.

The vibe of learning and discussion is palpably different when caravaning from location to location, company to company. Vlad Shenderovich, Director of Operations, LOLI Beauty agreed, saying, “it breaks the traditional format. I like that it’s interactive, focuses on the audience and not just the panelists so you’re able to see, interact, engage and ask questions.”

That is what makes YCC unique and rewarding. Not everyone gets to enjoy lunch on BuzzFeed’s terrace or tour Betaworks Studios’ private membership club. It’s more than just access, it’s an insider’s peek into the technology, ideas and culture that drive the business innovation and success.

Visit YourCloudsCan.com to see videos of what you missed and sign up to be the first to know about future events. Will you join us for the ride at the next YCC?

Futurism fans: To create this content, a non-editorial team worked with IBM, who sponsored this post. They help us keep the lights on. This post does not reflect the views or the endorsement of the Futurism.com editorial staff.

The post What Do a Toy Store and a Tech Accelerator Have in Common? Cloud-Based Tech. appeared first on Futurism.

What Do a Toy Store and a Tech Accelerator Have in Common? Cloud-Based Tech.