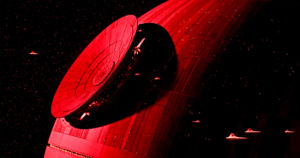 The U.S. military is in the early stages of sending a self-supporting, autonomous space station into orbit around the Earth.

In its earliest stages, the space station will be small and (literally) inhospitable — the Pentagon’s Defense Innovation Unit (DIU) wants a dedicated orbital platform from which to conduct scientific experiments, reports Breaking Defense. But in the long run, the DIU has tentative plans to upgrade the station so it can support life, which would give the government the unsettling ability to keep militarized crews operating in space.

According to the DIU’s call for contractors to design the space station, the orbital outpost needs to be entirely self-sufficient, and employ artificial intelligence to operate and steer itself in space.

But the solicitation also calls for a minimum internal volume of one cubic meter and the capability to endure zero to one atmospheres of pressure — not exactly the specs of the Death Star.

The director of DIU’s Space Portfolio, Col. Steve Butow, told Breaking Defense that the organization is more interested in laying out the basic groundwork of a dedicated orbital platform for the Pentagon — upgrades for specific military applications can always come later.

“In short, we are casting a wide net for commercial solutions that can meet the basic needs described in the first part of the solicitation (autonomous/robotic, etc),” Butow emailed to Breaking Defense. Here’s hoping whichever contractor gets the job remembers to cover up those pesky exhaust ports.

The post The Pentagon Wants Its Own Orbital Space Station, Like a Death Star, But Not, Okay? appeared first on Futurism.

The Pentagon Wants Its Own Orbital Space Station, Like a Death Star, But Not, Okay?