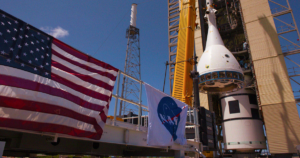 Before NASA can attempt to send astronauts back to the Moon, it needs to know they have a way to GTFO of harm’s way if something goes wrong during the trip.

Once the pair reached an altitude of about 9.6 kilometers (6 miles), the abort sequence triggered. This sent the crew module blasting away from the rocket and on its journey to splash down in the Atlantic Ocean.

NASA’s now rounding up the 12 data recorders the crew capsule ejected during its descent so it can analyze the data to confirm that everything went as planned.

At first glance, however, it appears we’re now one step closer to returning humans to the Moon.

“It was a very smooth liftoff,” Orion Program Manager Mark Kirasich said in a press release. “By all first accounts, it was magnificent.”