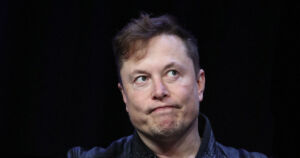 Earlier this week, the billionaire CEO sent an email to staff telling them that they "need to be extremely hardcore" and work long hours at the office, or quit and get three months severance, as The Washington Post reports.

Employees had until 5 pm on Thursday to click "yes" and be part of Twitter moving forward or take the money and part ways. The problem for Musk? According to former Uber engineer Gergely Orosz, who has had a close ear to Twitter's recent inner turmoil, "far fewer than expected [developers] hit 'yes.'"

So many employees called Musk's bluff, Orosz says, that Musk is now "having meetings with top engineers to convince them to stay," in an  embarrassing reversal of his public-facing bravado earlier this week.

Twitter has already been rocked by mass layoffs, cutting the workforce roughly in half. Instead of notifying them, employees had access to their email and work computers revoked without notice.

Even that process was bungled, too, with some employees immediately being asked to return to the company after Musk's crew realized it had sacked people it needed.

According to Orosz's estimations, Twitter's engineering workforce may have been cut by a whopping 90 percent in just three weeks.

Musk has been banging the war drums in an active attempt to weed out those who aren't willing to abide by his strict rules and those who were willing to stand up to him.

But developers aren't exactly embracing that kind of tyranny.

"Sounds like playing hardball does not work," Orosz said. "Of course it doesn't."

"From my larger group of 50 people, 10 are staying, 40 are taking the severance," one source reportedly told Orosz. "Elon set up meetings with a few who plan to quit."

In short, developers are running for the hills — and besides, they're likely to find far better work conditions pretty much anywhere else.

"I am not sure Elon realizes that, unlike rocket scientists, who have relatively few options to work at, [developers] with the experience of building Twitter only have better options than the conditions he outlines," Orosz argued.

Then there's the fact that Musk has publicly lashed out at engineers, mocking them and implying that they were leading him on.

Those who spoke out against him were summarily fired.

That kind of hostility in leadership — Musk has shown an astonishing lack of respect — clearly isn't sitting well with many developers, who have taken up his to get three months of severance and leave.

"I meant it when I called Elon's latest ultimatum the first truly positive thing about this Twitter saga," Orosz wrote. "Because finally, everyone who had enough of the BS and is not on a visa could finally quit."