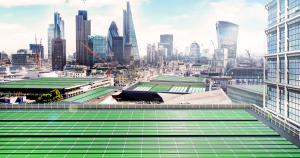 British startup Arborea is launching a pilot project on an Imperial College London campus to test out its “BioSolar Leaf” technology.

The first-of-its-kind system uses microscopic plants to remove pollution from the air while simultaneously producing food ingredients — meaning it could not only help fight carbon emissions, but address hunger in the process.

Arborea’s system involves growing microscopic plants, such as microalgae or phytoplankton, on solar panel-like structures that can be installed practically anywhere solar panels would go.

With photosynthesis, these plants remove carbon dioxide from the air while generating oxygen. According to the startup’s website, just one acre of their system does as much to clean the air as 100 acres of trees.

Cleaning the air is just one benefit of the BioSolar Leaf technology, though — the microscopic plants also produce an organic protein that Arborea extracts and uses to create plant-based food products.

More on air pollution: A Houseplant With Rabbit DNA Could Purify the Air in Your Home